It's time for Skyblock Cloud, Season Three! We're adding many new and exciting features for this map, with more on the way with our periodic content updates. There's also a content update for Prison Plasma releasing on Sunday, which also brings many much requested features to it.

Before I delve into the details of this reset, please note the following date and times for when we're launching Skyblock Cloud Season Three:

Island Top
As per usual, we'll be offering PayPal + Store vouchers for those players that have the highest valuation islands. To get island value, place valuable blocks and type /is level. These vouchers will be distributed every week from July 20th onward, until the map comes to a close.

​
What is being reset?
Below is a list of gameplay elements that will be cleared with the upcoming reset:
What is not being reset?
Features
We're adding a couple new features this season to make gameplay more exciting, as well as refreshing our Store offerings and loot tables in order to simplify your experience.

Inventory Pets
Inventory pets are coming to Skyblock, after their initial debut on Prison and Factions. We're also adding three new inventory pets that will be sure to help with your Skyblock experience.

Pets gain experience as they sit in your inventory for longer periods of time. Experience eventually leads to your pet leveling up. At certain leveling milestones for each pet, you will either unlock a better version of that pet's ability, or you will get a random item (or sometimes BOTH). All pets have a maximum level of 100.
Click to expand...

Below is a list of pets that will be available on Cloud: 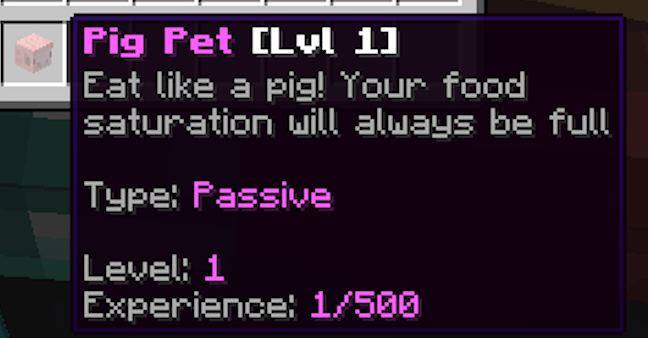 ​
Island List
Last season, we introduced Island Ratings. With Season Three, we're expanding on ratings and giving them a meaningful way to increase traffic to your island. When you type /is list, every island that an online player owns will be listed in a GUI format.

This list will be sorted by your average island rating, with the users with the highest amount of positive ratings being ranked higher. If you have placed a [Welcome] sign at your island, users that click your island from the GUI will be warped there.

Space Vaults
Space Vaults are a new event on Cloud that will take place three times a day. In order to participate in a Space Vault, you'll need to buy a ticket through /spacevault.

Once you buy a ticket, you'll be teleported to the start of the Space Vault when it begins. Space Vaults will be broken up into sections, which involve parkour, mob grinding, harvesting ores, etc. until you reach the final area.

Upon reaching the final area, a boss will spawn who you will have to fight until defeated. Once the boss is slain, all Space Vault users will be teleported back to Spawn and the top three damagers of the boss will be rewarded. Additionally, you will keep any and all ores, items, and XP you gain from the space vault.

XP, Ore Drops, and Mob Drops will all be amplified inside of the Space Vault.

Mail Man
Deliver items to your friends when they're offline or reward players for completing challenges by leaving them items with the mail man to deliver. Regardless of when they next login, they'll be able to access their mail box and withdraw any pending items, as well as see who sent them their item(s) and when they were sent.

You can start this process by visiting the mail man at spawn or typing /mailman.

Generators Overhaul
We're reworking generators with some much needed balance changes and benefits, with the following being the generators offered this season:
Each generator will have storage capacity, requiring you to regularly check in on it and empty it. Just like our current generators, they will be built over time once placing.

Space Coin Shop
We're adding items in the Space Coin shop that will only be there for a limited amount of time. Hovering over these limited edition items will display the time left to purchase it before a new item takes its place in the rotation.

These items will be more expensive, but also much more valuable compared to the current items in the space coin shop. We may in the future add a Discord channel that notifies you of new items when they become available in this cycle through a bot.

Store Consolidation
We've come to the realization that many offerings on our Store were simply not popular anymore and completely un-used. In an effort to not barrage you with unnecessary packages, we've removed the following packages from our Store and are instead making them available through loot tables of Crates, Monthly Crates, Lucky Blocks, etc. that can be opened in-game:
Additionally, we are reducing the price of Aliens and adding more functionality to them prior to the reset to encourage use of them, which we feel is a pretty cool feature that doesn't get enough attention currently. 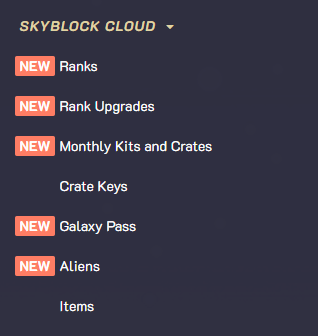 Jobs Improvements
Last reset, we added a Jobs NPC at spawn that lets you get rewards for certain tasks by completing challenges. With this reset, we're adding new challenges, new rewards, as well as new types of Jobs that you'll be able to commit to. This makes it easy for new players to earn rewards and compete for our prizes equally to anyone else.

We hope to see many of you take advantage of our Jobs system in order to get more out of your gameplay. Challenges
We're re-doing our current system to be more in-line with our Galaxy Pass challenge system. It will feature many more prizes, harder challenges, and tiers to get through. This will give you many more opportunities to earn rewards as well as challenge yourself to fulfill certain requirements.

This will be accessible in-game through /challenges.

Bug Fixes and Additions
We've fixed the following issues in this upcoming reset or added smaller features which weren't worth making a separate section about:
Conclusion
As always, thanks for supporting us! We'll see you soon for our next season of Skyblock Cloud, as well as a content update for Prison Plasma coming shortly.